It is often the case in many of the disciplines of Mexican arts and crafts that the artists' trade is an inherited family legacy that is mastered in youth and then in turn taught to each succeeding generation of descendants and extended family members. We visited with Señor Adrián González, considered by many collectors throughout the world to be one of the premier artisans of Metepec, and he graciously gave us a tour of his studio while he shared some of his family history. Señor Adrián told us that his father was the originator of the Tree of Life (although we should note that several other families have also made this claim) and that he taught him his craft at a very young age. He is pictured here next to an homage he created to honor his father. He told us about his wife and children and grandchildren, almost all of whom have followed in his footsteps as potters and painters, while concurrently pursuing other careers. He made an extraordinary Tree of Life depicting his family, and as he showed it to us he explained how the Tree was also an illustration of steps that comprise the process of making the trees. The bottom of the tree is still in it's raw, unfinished state; the next section was fired and then left in a natural terracotta finish; the next was painted in the subdued tones that were characteristic of the traditional appearance of the craft; and the last section was painted with the bright and raucous colors that became popular in latter days. 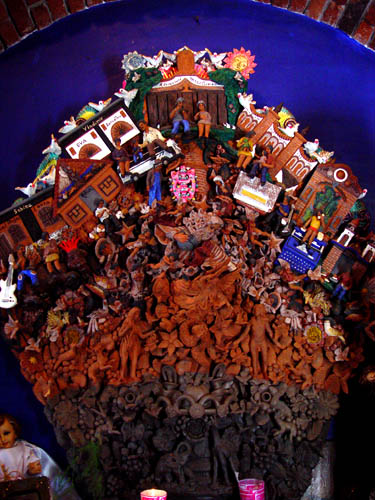 Don Adrián explained that there are many variations on the original Adam and Eve Tree; they are also often rendered in themes that depict famous aspects of Mexico's cultural heritage and cherished fiestas, such as Christmas, The Day of the Dead, the Virgin of Guadalupe, and beloved flowers and cacti such as the sunflower and the nopal cactus. Also in the studio were examples of many other enchanting forms of pottery made famous by Senor González and the artisans of Metepec: mermaids, Noah's arks, angels, Catrinas and nativity scenes. In accordance with the prevalent tradition of the majority of artist's families, Adrián's son Miguel Angel became a collected artist in his own right and works in the same style and techniques as his father, but also specializes in complex miniature scenes.